TR by sunshiner, with contribution by Richmond (at end)

As it was Norman's (new Noosa Yakker) first trip out with us and his first launch from Middle Groyne I decided that a slightly later start was appropriate as I wanted to check out his yak in daylight and brief him on getting out safely, also in daylight. The fickleness of the weather lately had already caused us to abort, at short notice, a couple of trips which Norman, who travels up from Mooloolaba, had planned to be his first. At 3:30am today I checked the weather again and thought it doable so Norman (nickname and callsign now ”stormin”) was in with a chance.

Richmond and stretch were already unloaded when I arrived at 05:35 but there was no sign of stormin. I was confident he’d show, and so he did, slightly late, having had a few navigation problems. I pointed out a few things on his yak that needed attention and we trundled down to the beach together.

By this time, richmond and stretch had already launched, several times as it turned out (I’ll let them explain). I pointed them out to stormin, slow moving smudges of colour and silhouette on the wind-ruffled waters of the bay.

Turning my attention to the launch procedure I pointed out the many potential pitfalls awaiting the inexperienced surf launcher. The channel with its strong outgoing current; the shallow areas on which waves could be seen breaking; the sets, etc. Stormin nodded and seemed unperturbed so I advised him to remove his cap, the only thing that by now was not tied down or stowed, and we entered the fray.

0610. Stormin, about to launch. Looks easy, eh, but the pic is deceptive. Crashing dumpers were arriving fairly frequently and out of the blue.

My predictive abilities regarding the arrival of sets, or not, are flaky. Nevertheless, stormin held back, just behind me in the channel and, when I said ”Go!” he started to follow me into what I thought was a beautiful lull. Fortunately he was a little slow off the mark (his Hobie Outback being a beast to paddle, and he couldn’t pedal because it was too shallow). I say fortunately because if he’d kept up with me he would have been smashed, big time. As usual, the wave of the day and its brother arrived just as I was in the pinch point. I was airborne on the first and totally soaked on the second, but the Stealth weathered both nicely. That's four trips in a row where I'd been totally soaked at launch. Once clear of the white water I looked around half expecting to see an upside down plastic wreck and stormin struggling in the surf, but he was still right way up, much further back. Somehow he then battled his way out to me and I couldn't help noticing on his arrival that his mop of black hair was sprinkled with drops of salt water and he was a little paler than a minute or so earlier. But everything was still on the boat, and he still had his cap, safely stowed away. Well done, stormin.

Now safely out the back, we reviewed the morning's lessons so far. (1) Never rely on sunshiner to make a safe call as to when to run the surf zone. (2) Stow or leash everything, etc.

The SE wind was making its presence felt as we moved off toward Jew Shoal, our intended destination. Richmond had reported by radio that longtails were blasting out south east of the shoal and stretch had reported that he was at Jew Shoal, had lost his glasses, and it was getting a bit lumpy.

Two kilometres into our trip to the shoal I spotted some terns fluttering out to the east and stormin and I altered course to take a closer look. This led, as it often does, to the sighting of another bigger patch of birds, further to the east, and I knew we were in with a chance. The first patch we caught up with were hovering and diving over a hapless pack of baitfish which were being slaughtered by yellowfin tuna, little fat guys which were launching themselves clear of the water and glittering liquid gold in the dull ambient light. Stormin had never seen anything like this before, the terns wheeling around, the tuna crashing through the bait. I got three casts away, getting one hit but no hook up before the tuna sounded. Stormin was ready and organized, I noticed, so we pressed on to the next bustup, further east again passing a pod of playful dolphins as we travelled.

The next bustup was more intense but the fish apparently smaller. Anyway, we cast simultaneously and simultaneously hooked up. Mysteriously, my braid broke after a minute or so of gentle pressure but happily stormin was still hooked up to what turned out to be his first tuna. 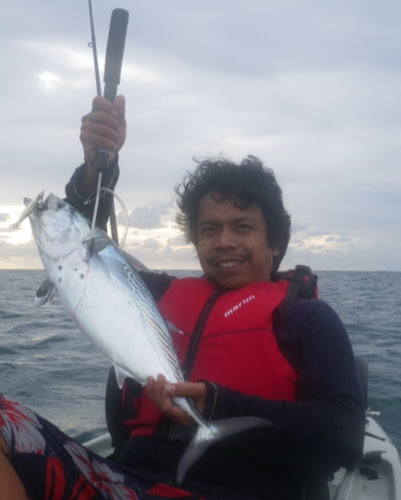 About now, richmond radios ”Screaming reel”. And shortly afterward, stretch announces that he’s not having much fun drift fishing at Jew Shoal (choppy, vision problems due to lost glasses) and has decided to head toward Noosa Head and then work his way back around the coast to the beach. Knowing that richmond is hooked up in that area, I suggested he troll a lure while paddling toward the headland as there seemed to be some longtails around.

Five minutes later, stretch sounds much more positive as he announces that he’s now heading back toward Jew Shoal because that’s the direction a big fish which has eaten his lure is towing him. So now we have both richmond and stretch hooked up in the same general area and stormin and I are there too.

By now, all signs of surface activity had disappeared and stormin and I were about two kilometres NW of Hells Gates. Stretch was still hooked up somewhere nearby, out of sight because of the swell, and richmond, also out of sight, had reported that he'd just stowed a nice longtail. The swell and chop were manageable but I opted anyway to punch into the breeze back toward Hells Gates, trolling as we went. 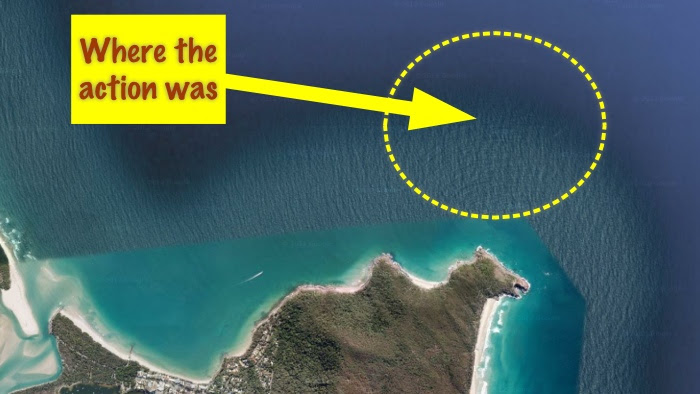 Richmond reported another hookup, same area. See you later, mate! Stormin and I were barely five minutes into our planned journey when my Halco LP went off. I knew this was almost certainly another longtail and turned to fight it only to find it had turned toward me. I frantically retrieved the slack line and was shortly amazed to see a longtail clear the water about 10 metres away and travel through a beautiful arc, splashing down about seven metres from take-off point. This was my fish, as my line whipping through the water confirmed, and is the first time I’ve seen a hooked longtail jump clear of the water. This spectacular event was also seen by stormin, nearby.

After the customary 15-20 minutes I had this fish across my lap and ready to slam into the fishbox. 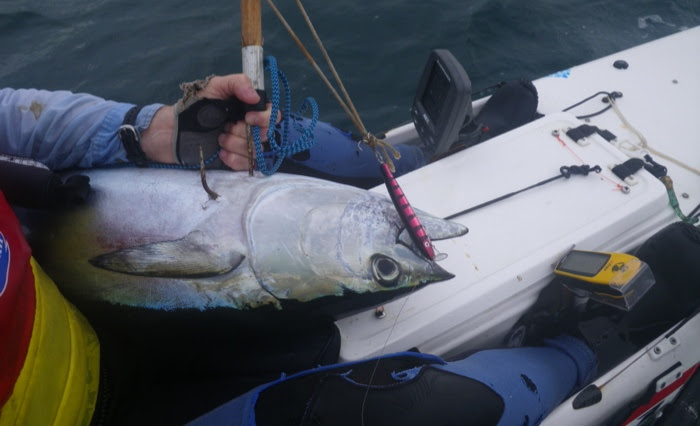 07:55. Longtail destined for the fishbox.

During this fight I heard stretch announce the capture of his first longtail, and richmond announce that he also had boated his second. So at one time, three of the four of us were hooked up to longtails. Stormin hung around me watching while I dealt with the fish and then we both turned south again (only stormin trolling as I'd opted to just get on the camera).

Soon we spotted our two companions for the first time that morning since launch as our paths converged. Stretch, his Espri already loaded with a typical 8-10kg longtail, soon announced that he was hooked up again. I passed stormin into the care of richmond, who also had begged off catching more, while I headed for stretch to accompany him on this battle and hopefully get some pics. This involved hanging around for quite some time while we both were blown further away from home.

08:22. Stretch battling his second longtail for the morning.

The gaff was unsheathed and ready for the coup-de-grace, and the fish, a big, shining longtail, plainly in view when a knot gave out and the fish slid back into the depths. Stretch just shrugged and we resolved to not fish anymore and simply plug steadily back the 4.4 kilometres of mostly open sea that now separated us from our launch point.

The only yakker with a line in the water now was stormin, hoping to nail a longtail as well as his already bagged mac tuna on this, his first foray with Noosa Yakkers. I would have rated his chances of a hookup pretty high but it was not to be. We all arrived back off Middle Groyne together after a 50 minute or so non-stop paddle, or pedal.

Given the waves breaking at Middle Groyne I was almost certain that stormin, inexperienced as he is at this game, would almost certainly be rolled. So he and I sat out the back and I checked him before sending him in. And yes, he did get rolled, while the rest of us got through unscathed, our efforts observed closely by quite a few spectators on the groyne.

Some pics on the beach... 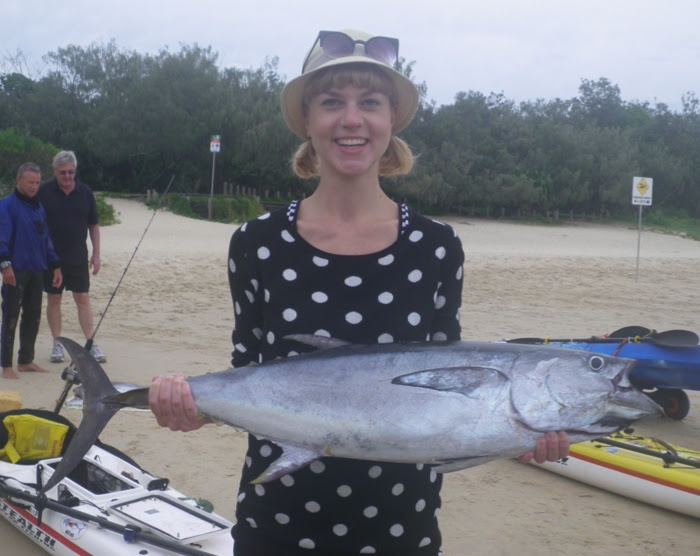 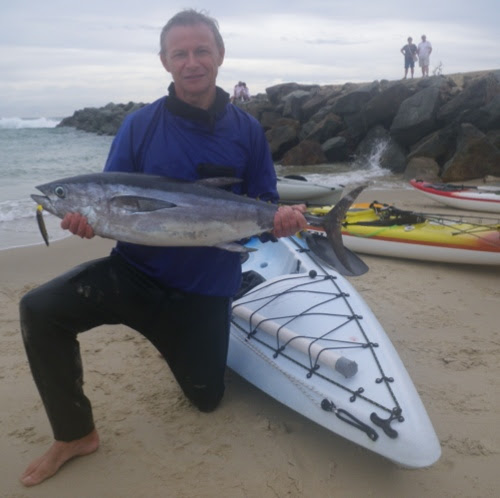 Stretch with his first longtail 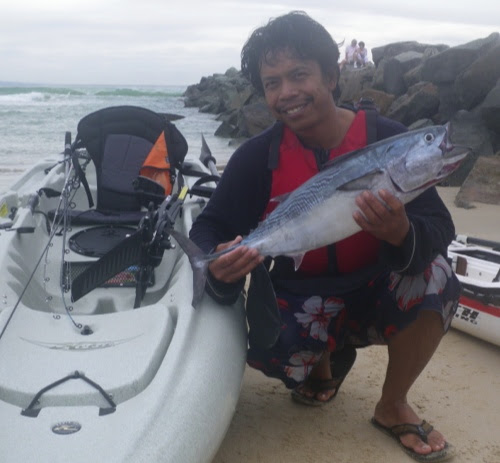 A damp stormin with his mac tuna 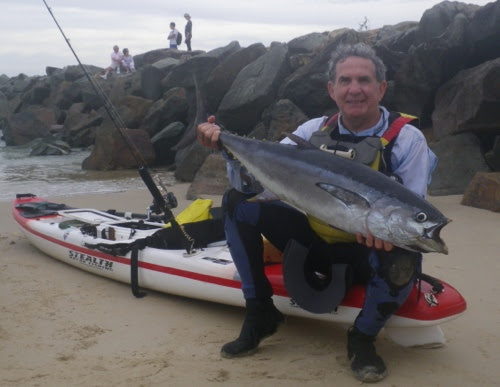 Me with my longtail (pic by stormin)

What a great morning in trying conditions! Pics of richmond's fish coming up hopefully...

Des and I launched together at about 5.20 am, just about dead low tide. After sitting in the hole waiting for a break in the sets for a couple of minutes, I decide to make a break for it. Bad call!

I could see a cracker coming, I paddled like crazy but hit the wave on a bit of an angle. Goodnight Irene! A big rollover for me.

I had another wave break on top of me and after that disappeared I managed to climb back on the yak and paddle out safely.

After I gathered my senses and sorted things out, I headed for Jew Shoal. The wind was up a bit, about 10 to 15 kts I'd say, and it wasn't very comfortable out there. It was a quick trip to Jew Shoal, but a real slog once there.

I could see Longtails jumping out occasionally and could also see schools of tuna busting out on the surface. I manged to fire off a few casts into the feeding tuna but couldn't manage a hit. I was also trolling a Barra Classic minnow that wasn't getting any joy either.

I decided to tie on a Threadybuster, a soft vibe style lure, to see if I could entice a hit on the troll.

It didn't take long for a fiesty 8kg Longtail to devour the Threadybuster. After a dogged fight I finally pinned the Longtail and dispatched him into the box. 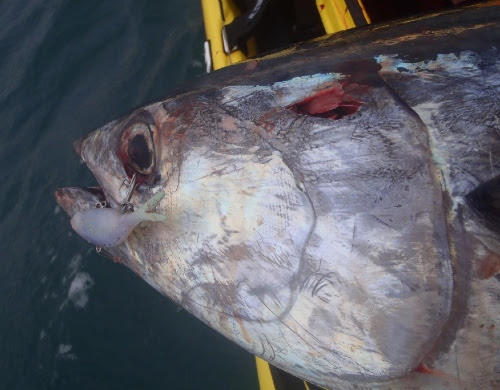 Sometimes these Longtails make a hell of a mess when you gaff them in the wrong spot.

I kept trolling the Threadybuster hoping for another Longtail. Conditions weren't real flash and the fish seemed to have gone into hiding a bit. The bustups were thinning out.

Not long after I had another hookup. I thought this fish was a Kingy at first as it fought differently and when I first caught a glimpse of it, it looked very much like a Yellowtail Kingfish. I was wrong, another Longtail.

After that fish was stowed, it was decided to head for home. Tough paddle into the wind but luckily, no dramas for me on the return to the beach, unlike my launch.

Ended up with two nice fish, learnt a bit more in relation to Kayak fishing, so all in all, had a good day. 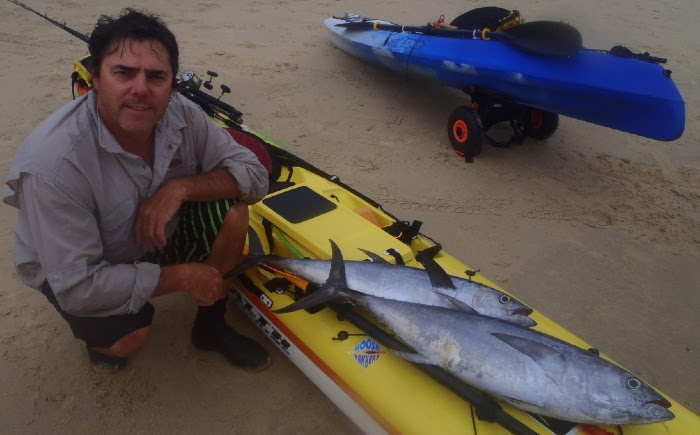